Texting on your mobile phone while driving is considered risky but the same activity when performed while walking on the street in not that safe either.

There have been numerous reports in the media of pedestrians walking into traffic, tripping on steps or even running into other people just because they were busy writing a text message or replying to an email on their cell phone when the accident happened.

When you can’t stop texting while walking

Since it’s hard to convince people to change their texting habits, some developers have come up with creative mobile apps that can make texting while walking a little more safer.

These apps basically turn your phone into a transparent glass so you can see what’s happening on the other side even while you are staring at the phone screen.

How? Well, they switch on your phone’s camera and add the email /texting functions on top of the live camera feed so you can type as before and still not run into anyone on the street. The following video should give you a better idea:

The iTunes App store lists quite a few such apps for your iPhone including Type n Walk, iType2go (they have a free version as well), Email n Walk and Text Vision. The latter even offers an option to publish tweets while walking.

Android users have Road SMS but unfortunately, this app is currently only available for Samsung Galaxy S phones. If your phone is running the Bada OS, your choices are Walk n Write and Type n Walk.

I have been hunting for similar apps for other platforms like Symbian and BlackBerry but no luck so for – if you know of one, please do share in the comments. 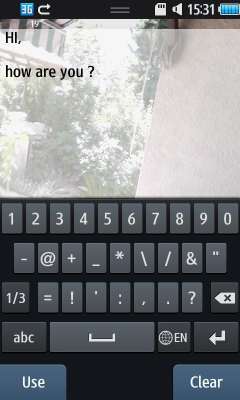 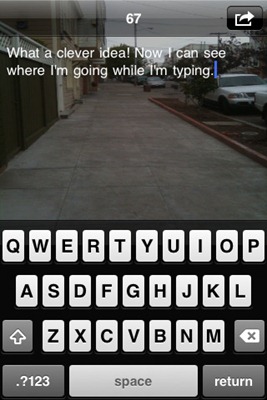