How to Record Skype Calls on your iPad

Skype, the much loved app for making voice and video calls, is now available for the iPad as well – download a copy from your country’s iTunes store. The iPad app can be used on both Wi-Fi and 3G networks and, like the desktop version of Skype, you can also send text messages and place calls to landline and mobile numbers from the iPad.

The Skype app is compatible with the original iPad and the newer iPad 2 though you would need the latter model for making video calls. One big advantage of using Skype over the built-in FaceTime app is that it lets video chat even with friends who are outside the Apple iMac/iPhone/iPad ecosystem as Skype is available for all popular platforms including Windows, Linux, Android, Symbian and more.

Related: How to Record Video Demos on iPad

How to Record Skype Calls on iPad (or iPhone)

So which app do you use for recording Skype calls on the iPad.

My personal favorite is Quick Voice – this is a free voice recorder with a minimal interface and you can you record audio of unlimited duration. The only limitation is that you cannot run Quick Voice as a background app and second, if the audio file size exceeds 5 MB, you can’t transfer it out of your iPad. 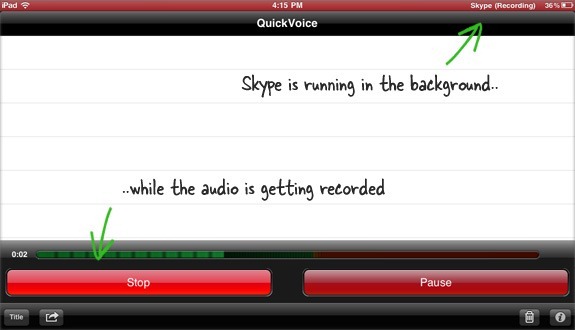 If you want to have the Skype app running in the foreground during the recording – like when you are doing a video call – you may consider getting a copy of Voice Recorder or Audio Memos. These are inexpensive voice recording apps for the iPad that have no limits and support background recording.

If you would like to jot down notes during a Skype call on an iPad, the recommended apps are Evernote (in the free category), Audio Notes, Sound Note and Notes Plus. With Evernote you can only type notes using the built-in keyboard while the other apps will also let you both type and draw freehand on the screen during the recording.

Finally, one unlikely but great contender in this category of Skype recorders is ScreenChomp. This is a digital whiteboard app that also records audio with drawing and exports everything as one video file.

The workflow is pretty similar. You launch the Skype app, initiate a voice / video call, then switch to ScreenChomp, or any of the other note taking apps, and start recording. Simple but there are obviously certain limitations.

One, you may only record voice calls using the above methods and if you are doing a video call on Skype, only the audio portion of the call will get recorded on your iPad.

Second, if you are using headphones during the Skype call, only your side of the conversation will get recorded since the built-in iPad microphone won’t hear the voice coming from the other side.