Move your Files to Relevant Folders with Ease

You’re pretty organized in your real life but your computer desktop is a complete mess of files because you have the habit of saving everything on your desktop first.

The pictures that you transferred from the digital camera, your email attachments, documents, program installers, etc. are just scattered on your desktop and you rarely get the time to organize them into relevant folders.

How to Keep your Desktop Tidy

Would you therefore like to have some sort of a “wand” that can bring order to your desktop without much effort? Enter DropIt, a free Windows only utility that can automatically sort and organize your files based on your own rules.

DropIt adds a tiny “drop” icon to your desktop and any files or folders that you drag to this icon are automatically sent to the right folder according to pre-defined rules. And you don’t have to be a geek to create such rules.

For instance, you may set up a simple rule saying that all the PDFs and Word documents (*.doc;*.docx;*.pdf) should go to the My Documents folder while the MP3s and Videos (*.mp3;*.mp4;*.wmv) be moved to the Media folder. 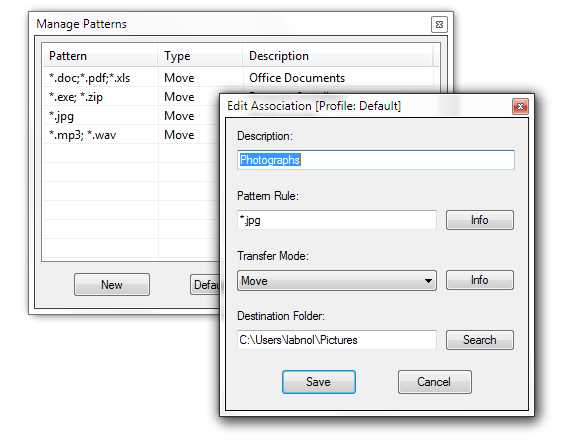 DropIt is handy not just for tidying up your desktop but for organizing files in any of the other folders on your hard drive. It can both move as well as copy files from one folder to another or you may set the transfer mode as ‘compressed’ in which case the files will be zipped before getting moved to the destination.

You can even combine DropIt with the very powerful desktop search in Windows to organize files on your computer. For instance, find all the PDFs with desktop search and dump them to an appropriate folder by dragging them all to DropIt.

Once you have a tidy desktop, get this wallpaper to organize the remaining application icons in an easy-to-find layout. Also, if you are only looking to organize your desktop files into logical groups but without moving them to other folders, check out the Fences utility.