Dictation - Speech Recognition in the Browser

Meet Dictation v2.0, a web-based speech recognition app that will transcribe your voice into digital text using the Chrome Speech API. You can also install Dictation as a Chrome App.

Unlike the regular Chrome web apps that are nothing but fancy bookmarks, the Dictation App for Chrome will run entirely on your computer. 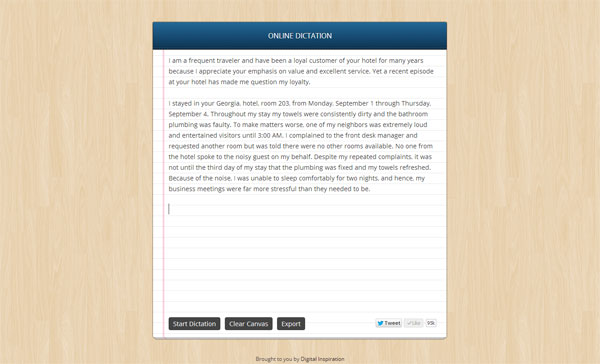 Getting started with Dictation in simple. Just plug in the microphone to your computer, click the Start Dictation button and watch as your spoken words are magically transformed into text. You can also use a few voice commands like:

If you make a mistake, or if Chrome makes an error while recognizing your speech, simple click the incorrect word and edit it inline. The entire notepad is editable as it uses the contenteditable attribute of HTML5.

The first release of Dictation happened in August 2012 and much has changed since then. The Web Speech API is now part of Google Chrome though you still need an active network connection for Chrome to connect to the speech recognition servers. The new version of Dictation App does sport a few extra features. One, it will auto-save your work in Chrome’s local storage so you can close the browser and your session would still be available the next time you Dictation.

Also, you can now export your transcriptions to Dropbox and Google Drive from Dictation itself. Please watch this YouTube video for a quick demo.

The Speech-to-Text support in Chrome is mostly accurate but because the API is still experimental, you are not allowed to submit Packaged Apps to the Chrome store that use the Web Speech API. ↓