How To Capture Images from a DVD Movie

You are watching Star Wars on a DVD and wish you could capture some of those movie scenes as still pictures for using as a desktop wallpaper. Or you have a home video recording and want to extract photos from the video for printing.

That’s not tough. To capture snapshots of a video playing in Windows Media player, you have the following two options:

1. Use the Print Screen key but only after you disable hardware acceleration (drag the slider from Full to None) else all you’ll see is a black image.

2. If Option 1 sounds geeky, download a third-party media player like VideoLAN VLC, VirtualDub, Classic Media Player or the very useful GOM Media Player (~4MB). They are all free, available for most platforms and have inbuilt screen capture capabilities for video without requiring any tweaks. 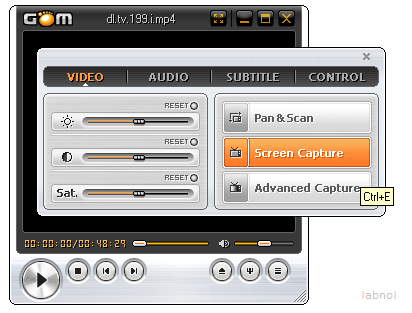 What really sets GOM Media Player apart from competition is the Burst Capture feature that lets you capture screenshots continuously - you no longer have adjust the video play-head to get the exact video frame. And you can even create a sequence of images from one a video.

If the video is too dark or light, GOM will let you adjust the brightness and contrast before the screen capture. You can also change the picture quality and the image file format.