A Little-Known Feature of SnagIt

Almost all digital cameras use the EXIF format for storing additional information with your photographs. This may include the name of the camera model and the various settings – like aperture, shutter speed, etc. - that were used when that photo was taken. Mobile phones with GPS may also record the geographic location of the scene with the picture.

Software screenshots are however less-intelligent.

When you capture a screenshot on your desktop, either using the Print Screen key or with the help of some screen capture program, the only meta data that is saved in your image file is the date and time when that shot was captured (or edited) and nothing more.

Thus, as your collection of screenshot images grows with time, managing them becomes even more difficult. How do you find screenshots of all the baby-stroller related shopping websites that you captured last week? Sometimes you have a screenshot file but are unable to recollect the site or program name that is captured in that shot.

Finding captures is however less of an issue if you are running SnagIt on your computer. The tool, like the digital camera, tries to record as much information as possible while capturing a screenshot and automatically saves that information with the image file itself. 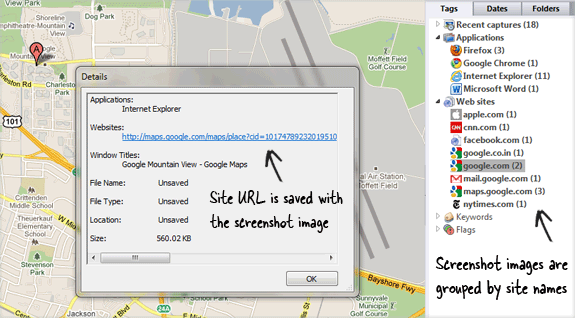 With the every screenshot image, SnagIt saves the name of the software program where that image was capture from and, if you are capturing a web page inside IE, it even records the full address (URL) of the page (see screenshot).

To give you an example, if you are capturing a screenshot of a Google Maps page, the image file will also have a record of the name of the application (Internet Explorer in this case) and the full web address. This is extremely handy when you have an old capture and would like to know the exact URL that lead you to that page.

Watch the following video to learn about this little-known feature of SnagIt in more detail.