Capture Screenshots in Office 2010 with the new Screen Clipping Tool

Microsoft OneNote has a built-in screen clipping utility that lets you capture any part of the desktop screen with one click. And it’s smart because if you screen capture a web page with OneNote, the URL of the page is automatically added to the screenshot image so you can always make out the source from the clipping.

This immensely useful screen clipping feature of OneNote is now part of Office Word 2010 and PowerPoint 2010 as well so you may no longer need a separate screenshot program for basic screen captures in documents and presentations.

Manan, who first noticed the screen clipping feature of Office 2010, says that the screenshot option is available under the “Insert” menu and lets you capture screenshots of open windows or any portion of the desktop screen via a marquee selection.

The screenshot dropdown (under Image) lets you create a new screen clipping as well as browse all your previous screenshot images that you may capture inside Office 2010. 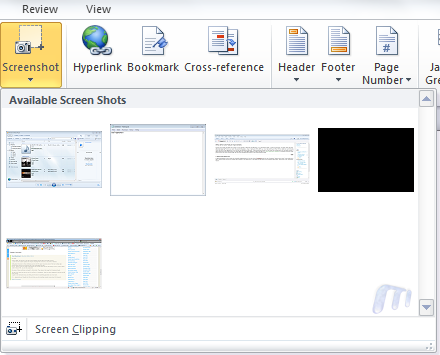 Certain test builds of Office 2010 are floating around on various torrent sites but if you want to test-drive a (legal) preview version of Office 2010, do put your name on the wait-list. The final release of Office 2010 is expected to happen sometime in the first half of 2010 - see the Office video trailer. Thanks Keith.