Last week Google announced that they are shutting down Google Reader and they have also removed the RSS subscription extension from the Chrome store that allowed users to easily subscribe to RSS Feeds inside Google Reader.

I have recently moved from Google Reader to Feedly (it looks like the best Google Reader alternative so far) but Feedly offers no bookmarklets and hence it takes quite a few steps to subscribe to feeds in browsers that do not support extensions.

Fortunately, it didn’t take much effort to fork the original Google Reader bookmarklet and make it compatible with Feedly. Just grab the “Add to Feedly” button provided below and drop it to your bookmarks /favorites bar.

iPhone and iPad users may refer to the iOS Bookmarklets page for instructions on how to install the Feedly bookmarklet in their Safari browser. 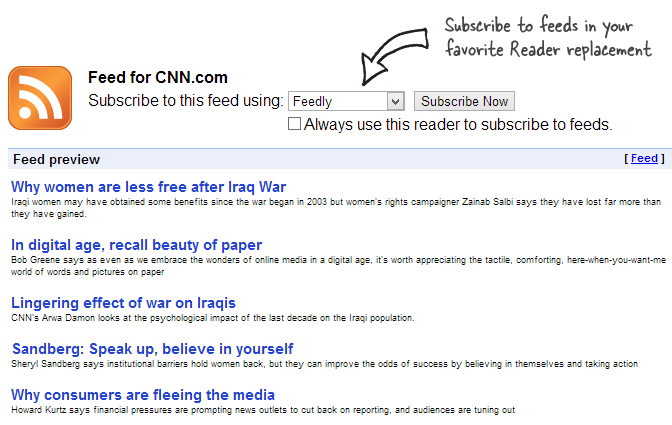 With the new Chrome extension, you can subscribe to RSS feeds in your favorite RSS newsreader.

The original RSS subscription extension developed by Google is no longer available but someone has already created a better clone and uploaded it to the Chrome store.

The fork, the source code is available on Github, is exactly like Google’s original extension except that it now works popular Google Reader alternatives including Feedly, NewsBlur and TheOldReader.

Also, support for Google Reader and iGoogle has been dropped.