Like most other kids of his age, our two year old loves nursery rhymes. We don’t have to buy him any DVDs though as all the popular nursery rhyme videos are available on YouTube and thus he can watch them online on the iPad itself.

And as he is too young to handle the iPad on his own, we usually connect the iPad to the TV using an HDMI cable - he can watch the YouTube videos on a bigger screen from a distance while the iPad is kept away from him at a more safe location. 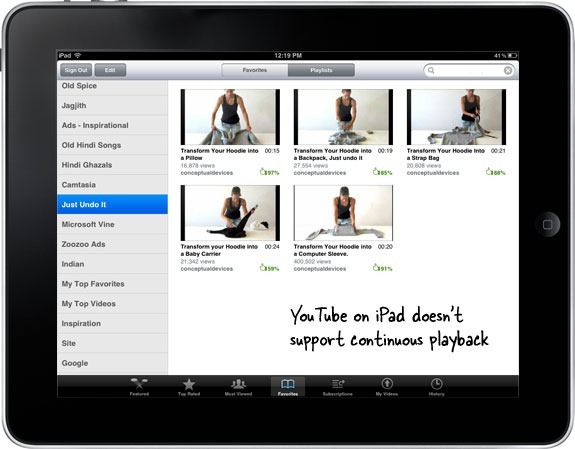 The only inconvenient part is that iPad doesn’t support YouTube playlists. That means once a video stops playing, one has to manually play the next video in the queue. Neither the YouTube app nor the YouTube mobile site supports continuous playback of videos.

There are however iPad apps that let you play YouTube playlists in “gapless” mode just as you do on the desktop. One such app that I recommend is YTPlayer (YouTube player) – it’s a free app that is compatible with the iPhone as well as the iPad.

You provide your YouTube username, or that of someone else, and the app will fetch all your public video playlists and favorites. You can then watch any of the video playlist in continuous mode with a simple tap. The limitation is that this YouTube Player doesn’t connect with your Google Account and hence it cannot find your private playlists.