Gmail, Yahoo Mail and Hotmail (now Outlook) are the three most popular web based email services around but how are they growing? 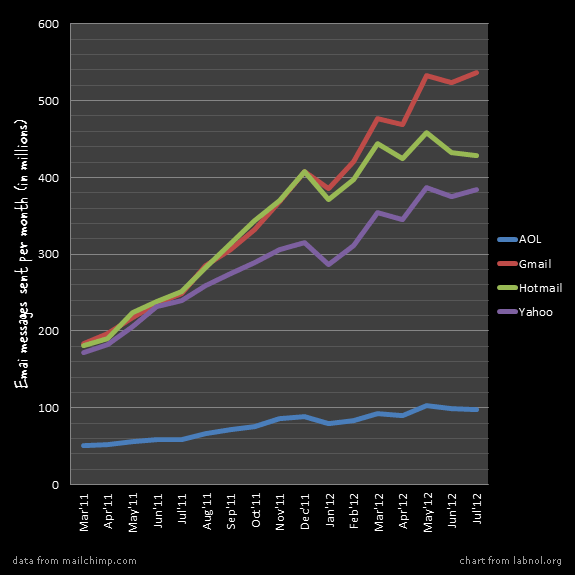 Email marketing company MailChimp delivers around 3 billion email messages per month (including this blog’s newsletter) and thus they know a thing or two about which email services are people actually using worldwide to subscribe to mailing lists on the web.

MailChimp analyzes the web domains of all their outgoing mail traffic every month and the results are often a good indicator of the relative pattern of growth among email providers. They use double opt-in before adding any email address to their database and thus the numbers should mostly represent active email addresses.

They have just released numbers for the last twelve months which clearly indicate that Gmail is growing at a much faster rate than the other two email providers (the number do not include Google Apps addresses that are also powered by Gmail).

Surprisingly, the relative usage of Hotmail addresses seems to have declined in the last two months (it should also be noted that Hotmail numbers do not include addresses ending with live.com or outlook.com domains). Let’s see if the launch of Outlook can reverse this decline.