Twitter, unlike Google Plus, does not offer a native polling solution so you have to rely on an external service to run a quick poll or even a quiz with your Twitter followers. You’ll create a poll on a service like Polldaddy or WuFoo and tweet the link, your followers can click the link and take the poll.

That’s how most polls are conducted on Twitter but the person has to leave the Twitter website in order to answer your poll. Wouldn’t it be better if there were a way to embed a live poll in the tweet itself that people can answer inline, much like subscribing to newsletters, without leaving the Twitter ecosystem? 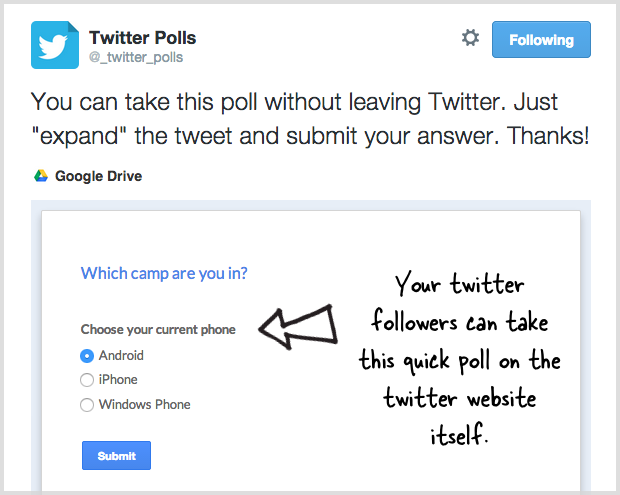 Well, that is possible, sort of, with Google Forms. When you tweet a link to a Google Form, Twitter embeds the actual form when the tweet is expanded. People can interact with the form and submit while staying on Twitter.

See this live example of a tweet that embeds a poll hosted on Google Forms - you can answer it within the tweet itself.

There’s no trick here except that you should keep the poll really short. That’s because Twitter will only display a question or two in the expanded tweet and most people will thus not be able to figure out how to navigate to the other hidden questions. (hint: Use the TAB key)

Also, while designing the Google Form, choose a theme with smaller fonts and set the description text as blank so that the actual questions are clearly visible in the expanded tweet. You can instead put the description in your tweet.