If you are using Office 2010 already, skip this part else here are four reasons that might tempt you to download Office 2010:

Reason #1. This Office 2010 release is still in beta but pretty solid and you can continue using the software for free until October 2010. That’s like renting Microsoft Office for 350 days but without paying a cent.

Reason #2. Office 2010 includes several new features. For instance, you can now directly save documents to the cloud or deliver remote presentations without leaving PowerPoint.

Reason #3. Office 2010 can co-exist alongside Office 2007 and other older versions of Microsoft Office. Or if you don’t want to touch your existing desktop applications, install Office 2010 separately using virtualization software. 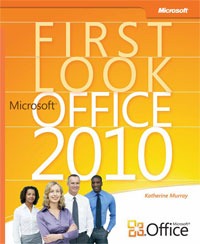 First Look: Microsoft Office 2010 is an upcoming title by Katherine Murray that will quickly walk you though most of the new features in Office 2010 including video editing, photo effects, backstage view, co-authoring documents, sparklines, etc.

The book has the following chapters. It was written before Office 2010 beta was released in public and therefore barely mentions Office Web Apps and Office 2010 for mobile phones.

It’s worth your time and the good news is that you can download the book [PDF, 10 MB] from SkyDrive for free courtesy Microsoft Press who are the publishers of this book. Grab it fast because, according to MS Press, this free download is available only for a limited time.