This is the Microsoft Office Professional Plus 2010 edition so you get to use Publisher and Infopath 2010 as well in addition to the regular Word, Excel, PowerPoint, OneNote and Outlook applications. 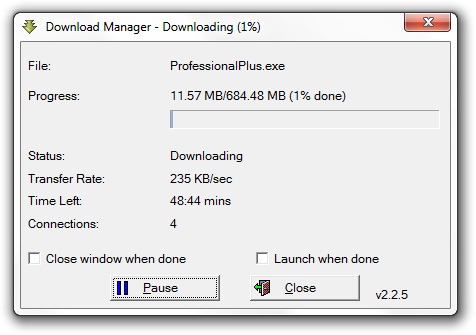 Microsoft Office 2010 is now available as a free download on microsoft.com/office.

Alternatively, you may use this link to access the directly installer of Office 2010 Professional edition - the link may require you to sign-in with your Windows Live ID. And other then Office 2010, you can also download the full version of Visio 2010 and Project 2010 for your Windows computer.

The Office 2010 installer weighs around 700 MB in size but you need around 3 GB of free space on your hard drive for the installation.

All products require online activation after installation. In case of Office 2010, you can enter the serial number inside Word 2010 and it will automatically activate all the other Office programs. Microsoft Project and Visio 2010 will require separate activation since they use a different set of keys.