Publish your Blog as a Magazine with Google Currents

Google’s widely anticipated alternative to Flipboard is finally here. It’s called Google Currents and the next screenshot should you give an idea of what Currents is all about. 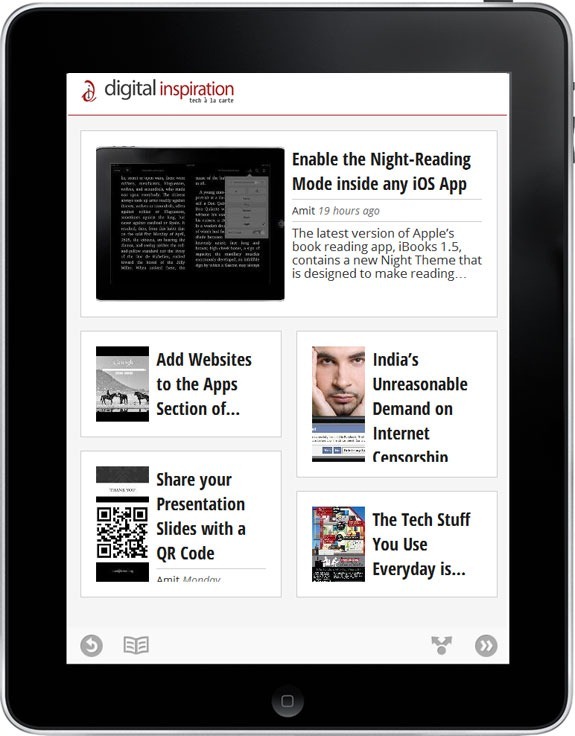 Google Currents is a Flipboard like app that lets you read blogs, news websites and other online publications in a magazine format on your mobile phone and tablet devices. The app is available for both Android and iOS platforms.

One big advantage with Google Currents is that you can read your subscriptions offline and it will even download the embedded images for offline access.

You can get Google Currents now from the Android Market and the iTunes Store. This is currently available only for US users but there’s at least an easy workaround for iPhone /iPad users.

As a web publisher, you can package one or more RSS feeds, image slideshows, tweets, videos, social network updates and any other HTML content into an “edition” and publish it to Google Currents which others can then subscribe to on their tablet or mobile phone.

There’s no programming required as Google Currents provides an web editor for publishers to create these bundles. You can also pull content from Google Docs and ePUB ebooks into Currents. The default layouts are beautiful but advanced users may apply their own CSS styles to further customize the appearance of their magazine.

Google Currents can also be used as a RSS reader to follow feeds that are not available as standalone editions. Simply subscribe to any RSS feed inside Google Reader and then pull it directly into Google Currents using Add More – > Library – > Google Reader. The plain feed will automatically be served in a magazine layout similar to other editions.

There are quite a few reading apps – like Flipboard, Yahoo LiveStand, Pulse, Zite and AOL Editions - that let you publish (and consume) online content in a magazine format. However, Google Currents is probably the only app that will share advertising revenue with publishers which is obviously a big incentive.

When Amazon introduced blog publishing for Kindle, there was a concern that people would publish someone else’s RSS feed as their own and monetize it through the Kindle Store. That is however unlikely to happen with Google Currents as it only lets you include content from domains that you have verified through Google Webmaster Tools.