How to Find WiFi Hotspots in your Area 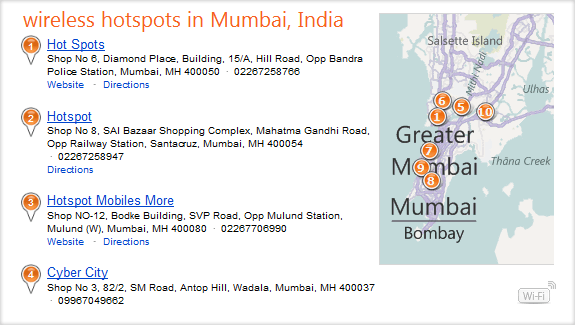 If you are travelling to a new city and are trying to locate Wi-Fi hotspots around to access the Internet, both Bing and Google may help you find the information you are looking for.

Go to Bing.com and search for “wireless hotspots near Delhi, India.” Replace Delhi, India with the name of your city or, if you are in the U.S., you may even use zip codes with the search query as in the following examples:

You should switch to the U.S. edition of Bing to use the hotspot finder feature though they do have hotspot location data for Indian cities as well.

Google Places may also be used for finding Wi-Fi hotspots anywhere in the world (screenshot) and the syntax is pretty similar to that of Bing. For example:

Google Places gets data from business owners as well as listings on travel sites as these listings may have information on whether that place offers Wireless Internet or not.

Also, the hotspot listings appearing in Google and Bing are businesses and less likely to be ‘public’ hotspots so you’ll be disappointed if you were looking for free Wi-Fi.