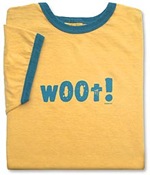 Merriam Webster just crowned “w00t” as the online Word of the Year 2007.

For those who hear “w00t” for the first time, it is a slang phrase used as a celebratory statement or an exclamation of happiness in the geek community like - “I just cracked the password of my router. w00t!” or “I just got my payment! W00t!”

Like everything else, the word “w00t” too has a Wikipedia entry but the surprising part is that Wikipedia members have proposed to delete the W00t page from Wikipedia database on December 12.

The reason being that there are no facts to verify the origin of the term w00t and that the term has not yet reached general usage. Kind of conflicts with the recent news.