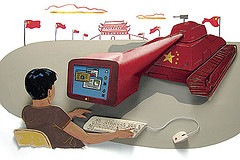 When it comes to filtering content on the web, China tops the chart (see Internet World Maps) - the country has extensive filters in place to automatically block content that contains “offensive” keywords like “Tibet”, “Democracy” and more.

The Chinese government has also imposed tight rules for the Internet service providers in the country to ensure that ISPs monitor data exchanged by their customers and block sensitive stuff before it even reaches the government routers.

Wondering how life would be for the average Internet user in China ? Well, if the recent recommendations of our “ill-informed” politicians are approved, India could become another China.

The parliamentary standing committee seeks to raise the liability of internet service providers in the country holding them responsible for all blogs, emails, Orkut scraps, web searches, IM messages and other internet activity performed by their customers (or subscribers).

If that ever happens and the bill gets approved, it is safe to assume that Indian ISPs will blindly follow the footsteps of their Chinese counterparts and actively block stuff that they consider even 0.01% illegal - after all, they would want to stay out of the legal loop.

And yes, the ignorant ISPs in India have done a similar mistake before when they banned access to blogger in India though the government had issued a circular for blocking just a dozen blogs.