What Changed the Game for Indian Film Industry in Early '90s

It has always taken a bold, breakthrough idea backed by conviction that has broken the mould and unleashed business opportunities.

In our Game Changing Case Studies; we will look at examples of Innovative Brands and Companies; that created businesses where none existed by challenging the existing paradigms and delivering breakthrough solutions to their consumers.

In our first such case studies; we will look at India Cinema (popularly called Bollywood) and what changed the game for the Indian film industry in the early 90s.

The Bollywood of today is the most prolific films producing Industry across the world; releasing almost 700 films a year and employing 5 million people. In terms of the number of tickets sold – it’s the absolute highest; selling 3.6* billion tickets a year vs. 2.6* billion in the US (2002* figures); with the gap widening every passing year. It has films with budgets running into 20 to 30 million $; that could garner as much money in theatrical revenues alone.

This thriving industry of today was on a verge of collapse in late eighties/early nineties; ridden by piracy, under-world influence (due to lack of organized financing) and poor exhibitor infrastructure; the well heeled family audiences shied away from visiting poor quality theatres preferring instead to watch movies at home on newly launched Japanese VCRs; poor law enforcement meant rampant piracy and lack of organized financing meant producers could either look up to the underworld guys for financing or approach private money lenders charging exorbitant interest rates.

Two significant changes happened at that time; one led by the producer fraternity and the other led by exhibitor fraternity; which changed the face of the Indian film industry 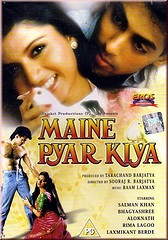 One of the leading production houses called Rajshri Pictures; known for ‘clean family entertainers’ produced a gem of movie which tugged at the hearts of a billion Indians; the film did not feature any ‘star’ actors; had good production values, story line, screenplay and music and was an instant hit.

This movie was released in only a handful of cinema halls with good infrastructure; with an offer to release in more cinemas if they improved their infrastructure – sound system, seating and air conditioning.

The demand for tickets at the handful of theatres it was released was such that they were packed to capacity for 7 weeks which prompted other theatre owners to follow suit. Limited release also helped the producers keep control over piracy. This movie ensured two things –

b) Every major city in India had at least one theatre with Dolby SR, cushioned push back seating and air conditioning

The one big learning in this was the conviction of the production house on their product; and their understanding of their consumer needs. Both in terms of product and service which ensured they win in both the first and the second moment of truth. 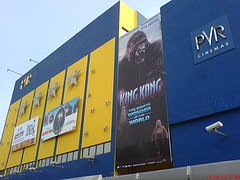 The other significant change was the coming up of the first multiplex in India in Delhi (early 90s); which completely redefined movie experience for the consumer; significantly improved the business as the consumer was willing to pay Rs 100 (2$) for a ticket which was till recently bought for Rs 25.

This simply catalyzed the business of cinema as the overall turnover value skyrocketed upwards; soon there were multiplexes in every city of the country helping movies garner theatrical revenues in excess of 20 to 30 million dollars. Big bucks attracted organized players from Sony to Warner brothers and helped the industry wriggle out (though still not completely!) from the clutches of the underworld.

In starting the first multiplex the company PVR ltd.; showed a lot of vision, foresight and impeccable understanding of the changing Urban Indian consumer; who was ready to embrace the best the world had to offer and had the wallet to match.

If I look back at the Indian film industry’s evolution over the last two decades; these two events would serve as points of inflection to the business of making films in India.