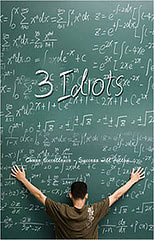 Every time an Aamir Khan flick is up for release, one could easily expect slew of marketing initiatives. This time is also no exception, with 3 Idiots slated to release on Christmas, the brand ‘Aamir’ is busy with his own style.

Firstly, he is on a Discover India tour, where he is visiting places in different parts in a disguised manner giving away prize to anyone who recognizes him. Once his day is over in a city, the recording is shown across all news channels the next day. Uptil now he has been to six cities and nobody knows where his last (seventh) stop would be.

And after Amitabh Bachchan, the Reliance ADAG group has also associated with Aamir in a big way. Two of its verticals – gaming site, Zapak.com and Reliance Life Insurance have associated themselves with the movie.

Zapak has partnered with a gaming website idiotsacademy.zapak.com where Aamir has gone hiding. Reliance Capital has launched ’All Is Well Insurance Plans’, keeping in view the movie’s anthem.

Aamir Khan has even designed a range of 3 Idiots T-shirts which are being marketed by Pantaloons.

Statistically, Aamir has always scored whenever he is involved in a film’s marketing, hopefully he would score this time too.