Send your Handwritten Notes to Google Docs with Livescribe

Wouldn’t it be nice if you could write (or draw) on a piece of paper with a pen and send that handwritten note straight to the cloud – like Google Docs or Evernote – for digital archiving? 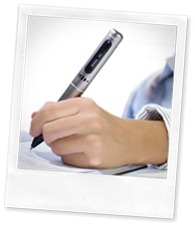 One option is that you use scan the paper as a PDF file and upload it to Google Docs but if you need a solution that’s more simple and completely automated, consider getting yourself a Livescribe pen.

Livescribe is an impressive piece of technology – it is like a regular pen with an ink cartridge but unlike any other pen, Livescribe pens record everything that you write on a notebook including the audio that you hear (like when you are in a meeting or a lecture).

What is a Livescribe Smartpen?

Livescribe today announced a new software update that will let you send your handwritten notes from paper to cloud services like Facebook, Google Docs or Evernote with a few taps.

You draw a small double-line on the paper that you want to archive, write the destination name on that line (like “Google Docs”) and the next time you connect your pen to the computer, the note will find its way to the cloud automatically.

A limitation is that the transfer is not wireless and will only happen when you connect the pen to your PC or Mac. Livescribe Pens start at $99 (the basic model has 2 GB storage) but there’s another recurring cost – it only works with a special kind of paper.

Demo: Send your Notes to the Cloud