The Sysinternals team at Microsoft today released another useful software utility for Windows called Desktops to help people who run multiple applications at the same time. 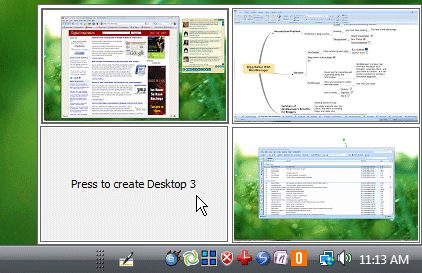 Desktops (v1.0)  is a Virtual Desktop Manager that lets you create up to four different desktop screens for arranging all those open applications in a more logical and productive manner.

For instance, you could put all work related programs in the first desktop window, chat programs in another virtual window and so on. This makes life less confusing when you have dozens of programs running simultaneously on the desktop. 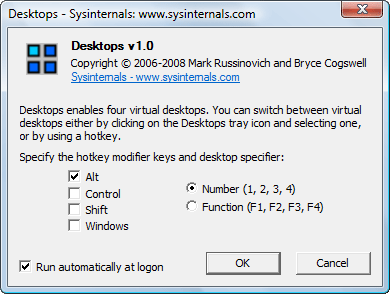 The software runs in your Windows taskbar. And you can very easily switch from one virtual desktop to another by pressing the keyboard shortcut or through your mouse.

Microsoft has long offered virtual desktop manager as an XP Power toy but the newer one is very light and also compatible with Windows Vista.

There are a few rough edges like the Alt+Tab shortcut stopped worked after running Microsoft Desktops but that should be fixed pretty soon considering that the hard-working Sysinternals team are releasing updates for other utilities so frequently.