Microsoft OneNote or EverNote for Taking Notes and Web Clippings

EverNote vs OneNote - Which is a better notebook software ?

It’s a myth that your require a tablet PC to use these scrapbook and content capturing software - they just work perfect on desktops and laptop computers.

Now which is your favorite software - EverNote or OneNote from Microsoft ?

EverNote has free version though that doesn’t support handwriting recognition and OCR (search for text in images).  OneNote comes with a 60-day trial but then you have to active the software in order to user it beyond the trial period.

Microsoft OneNote software is no less than a powerhouse for organizing things and “Getting Things Done” - offers excellent integration with Microsoft Outlook and other Office programs, you can record audio and video directly in OneNote notes, it comes with a inbuilt screen capture tool and there are OneNote extensions for IE and Firefox to capture webpages and web pictures into OneNote seamlessly - just a perfect software and very tablet friendly. 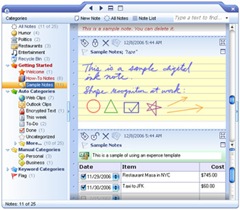 EverNote, on the other hand, is no less popular. The best part about EverNote is that they have a free version which should suffice the needs of most GTD fans. OneNote has tabs while EverNote puts the notes, pictures and web clips in a scrollable window where you can easily filter notes by time period, categories, note type or even keywords.

EverNote works on Linux too while Microsoft OneNote, as you would expect, is Windows XP / Vista only.

In OneNote, you can have different types of inputs in one note including handwritten text, shapes, typed text, etc. EverNote would require you to specify the type of note - it could be printed text or ink (for tablet PC users).

You could type a task in OneNote 2007 and that would appear in Outlook 2007 - that kind of integration is missing in EverNote.

Both OneNote and EverNote support most pen tablets including the Wacom Graphire and Logitech io2 Pen.

One very big advantage of EverNote is that is very light on computer resources when compared with OneNote and requires less steps to save a web clip in its database.

If you are an Office junkie, you should probably stick to OneNote but if you just need to collect notes and pictures which can be retrieved easily, get EverNote - it’s again a very well thought and fantastic product with an intuitive interface.

Try to organize your life with any of these wonderful software and you’ll play a big role in saving trees.