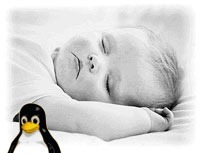 If you are not a geek, let me explain the logic of this very simple program.

The program will first auto-eject the CD-ROM drive of your computer and then it will close that open tray. This open-close loop will run forever unless you terminate the program manually.

Now the interesting part - using just these four lines of code, a geek turned his old Linux* computer into a baby rocker.

He attached a string between the tray of the CD-ROM drive and the baby seat and as the tray would open and close repeatedly, the smooth movements were enough to put his baby to sleep. Awesome.

PS:you are not on on Linux, you can build a similar Baby rocker program for Windows using Autohotkey software.