Google Cloud Connect, as described in the above video, is free plugin that lets you easily integrate Google Docs with Microsoft Office.

You can write documents inside any of the Microsoft Office program and then use the Cloud Connect toolbar to directly upload that document to your online Google Docs account. The link between the local Office document and the online Google document is maintained so you can later edit the same document locally and sync the changes with Google Docs.

This useful plugin just got a little better today.

Google has released a new update to Cloud Connect that would let Office users directly open any of their existing Google Documents directly into Microsoft Office for editing. Just choose the “Open from Google Docs” open under the Google Cloud Connect toolbar and select the document that you want to edit locally. 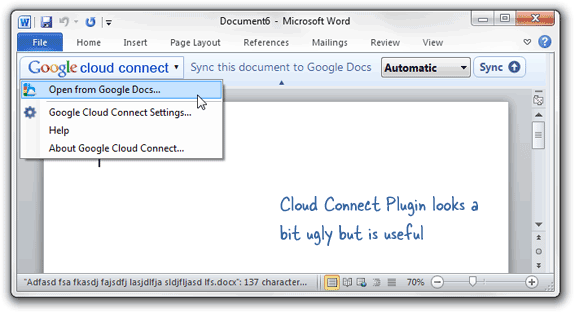 There’s however a big limitation here – you can only download those documents from Google Docs that are still in the original Office format and were not converted into the Google Docs format at the time of uploading. Also, any documents uploaded to Google Docs via Cloud Print cannot be edited online – Google Docs will just act as a store for those documents.

Google Cloud Connect works with all the recent versions of Microsoft Office and supports Word, Excel and PowerPoint files (including the 2010 formats like .docx or .xlsx). See the other alternatives to Cloud Connect.