While graphic designers, Web developers and other such “creative professionals” rely heavily on these products, many Adobe users are amateurs who use Photoshop to spruce up their Facebook photos or Premier Express to edit their YouTube videos. 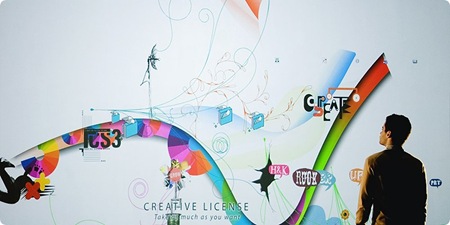 Using some fairly sophisticated tracking hardware and flash scripting, peoples’ movements are recorded and translated into an animated mixed-media mural.

As pedestrians walk past the wall, infrared sensors will lock on to the person closest to the wall; that person then will control a projected slider button at the bottom of the wall.

As the selected pedestrian continues walking and moves the slider along, randomly-generated, colorful animation and music will spring out of the wall, developing or receding at the pace that the person advances or retreats. When each selected pedestrian reaches the end of the wall, “their” design will be in full blossom, above the campaign’s message: “Creative license: take as much as you want.”  [via]