How to Make Firefox Run Faster

Earlier we suggested improving the speed of Firefox by using a brand new profile. The trick is effective because it creates an almost virgin copy of Firefox sans any problematic add-ons or user settings that were probably causing Firefox to slow down.

James Meyer has written an alternate trick where you can make Firefox run faster even without losing any of the cookies, bookmarks or extensions.

He says: In my experience, what slows down Firefox is usually some preference for some installed add-on.

To fix the problem, make a copy of the pref.js file in your profile, and then edit it.  The prefs.js file can be edited using notepad and it is available in your Firefox profile folder: 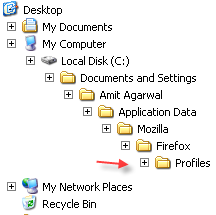 Try removing lines that are related to various add-ons, and you will at some stage remove the line/lines that are causing the problem.

A method I have tried before is simply remove half  of the lines, and try running Firefox with several tabs of pages with a lot of content.  When you have identified the bad half, restore the original prefs.js file and remove half of that bad half and try again.

In this way, you can identify the lines that are causing the problem and won’t lose all your saved preferences.

Thank you James. As he suggested, make a backup of your Firefox Preferences file before deleting any lines.

Run Firefox 3 And Firefox 2 Together