Adobe Presenter 7 is a Microsoft PowerPoint add-in that transforms your boring presentations into interactive and very engaging Flash movies that can be easily shared as regular web pages, PDF documents or you can even distribute them on mobile phones that support Flash like Nokia or Windows Mobile.

Adobe Presenter, that was earlier known as Macromedia Breeze until Adobe acquired Macromedia, is available for the PowerPoint on Windows only but the output can viewed on any browser / computer that has Flash Player including Mac, Linux and even Unix (Solaris).

For examples, check these Google Webinars - they are all done in Breeze, now Adobe Presenter. 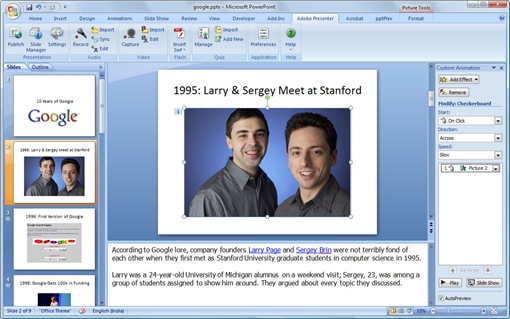 This is main authoring window of Adobe Presenter that appears as a new menu inside Microsoft PowerPoint. It supports Office XP, 2003 and the new PPTX format of PowerPoint Office 2007.

To get started, you just open the PowerPoint slideshow, switch to the “Adobe Presenter” and publish in the desired format. All your slide transitions and animations are well preserved in the output.

And if you aren’t too happy with the default factory settings, no worries - almost everything inside Presenter can be easily customized and branded included the color schemes, fonts, layout, logos and so on. 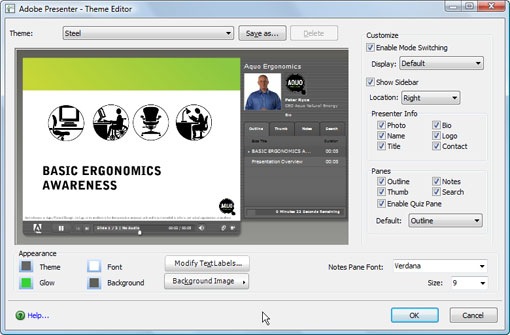 Other than slides, you can add audio narrations, record webcam video or import existing video clips into your presentations. It supports almost every video format from MOV to AVI to 3GB and encodes them internally to Flash video using the On2 FLV encoder.

There’s a built video editor as well to help you add some basic video effects your video clips included inside PowerPoint. In my test run, I imported a 3 MB Windows Media video clip into Presenter and the output size of the entire presentation was still less than 2 MB without any considerable loss in video quality. 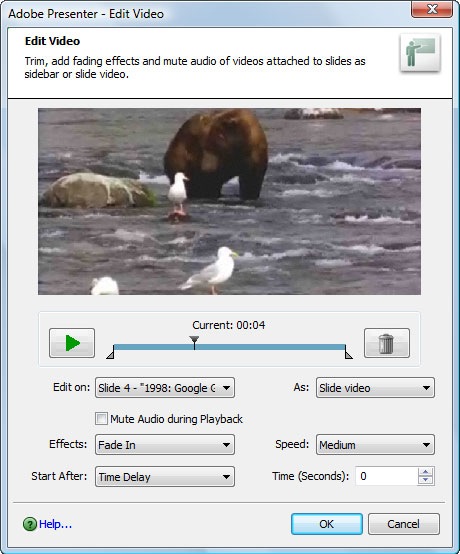 PowerPoint Video Editor in Adobe Presenter - I was expecting some choppy video with dropped frames but that wasn’t the case.

When it come to importing audio, there’s something very useful called “Wait for User.” It’s a simple marker that will auto-pause the presentation at a particular point and will resume only when the viewer clicks the play button again. Now this will be handy if you are explaining something but want audience to try that out before proceeding to the next slide. 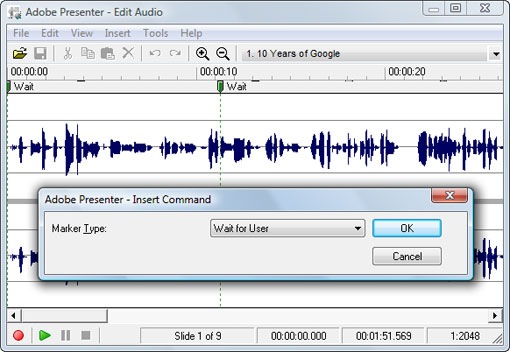 If you like to use Adobe Presenter for creating product demos or training videos, there’s good support for importing SWF movies so you can very easily import any screencast video that is done in Adobe Captivate, Camtasia Studio or any other screencasting tool.

And if your presentation has multiple presenters (like your Training manager is presenting the first 10 slides while the marketing guys handles the rest), Adobe Presenter has something called a “Slide Manager” that helps associate slides with the bio / picture of different presenters. So your audience will always know who’s speaking behind the scenes. 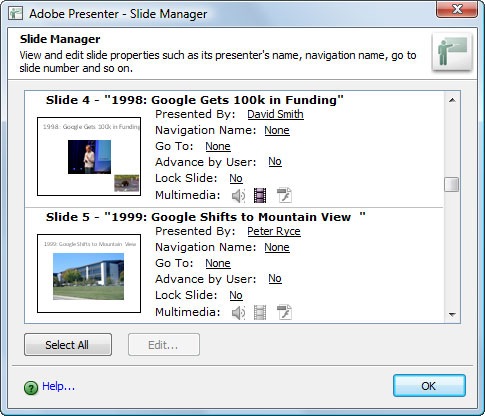 Another interesting feature in Adobe Presenter is support for Quiz and Surveys but that is something useful only if you have an Acrobat Connect account because the Quiz scores or survey results can’t be captured otherwise. The standalone version of Presenter (without Acrobat) doesn’t support reporting via email or php scripts yet.

Other than limited reporting options, there are a few other things that were missing like:

2. You can convert PowerPoint presentation into Flash one at a time. A batch converted would have been useful for businesses looking to port their entire library of presentation onto the web or mobile / PDA devices.

3. The slide notes that are included in your PowerPoint Presentations are also available in the Flash output. Unfortunately, they are produced in such a format that Google bots cannot index text content inside these Flash slides.

Overall, to call Adobe Presenter as a “PowerPoint add-in” doesn’t do enough justice to the program. It is extremely capable, requires no training and brings Flash output to your existing PowerPoint but at a price - a single license of Adobe Presenter costs around $500 though it could be much less for the education community.