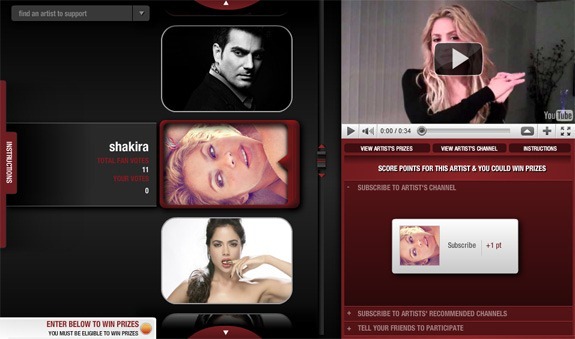 YouTube has been hugely successful in getting music artists and other celebrities from the entertainment industry worldwide to create their own video channels on YouTube. From Lady Gaga, Justin Bieber to our own Priyanka Chopra in India – they all have an official presence on YouTube now.

The next logical step is to get people to subscribe to these YouTube channels so that they know when their favorite celebrities have uploaded new videos on YouTube.

For this reason, YouTube has launched a new contest called MyYouTube where people can subscribe to the channels of their favorite celebrities and in return, some of them will receive autographed merchandise from the celebrity.

The MyTube contest in open to YouTube users in India, Australia, South Korea and couple of other countries. And it is interesting to note how YouTube is using social media to make this contest go viral.

First, in order to win, you need to subscribe to a channel and also four other channels that have been recommended by that celebrity. Second, you’ll also have share on Twitter and Facebook that you have subscribed to that channel. That explains why you may have been seeing those #MyYouTube updates in your Facebook and Twitter streams.