Twitter imposes certain restrictions to prevent abuse of the system from bots and other web apps. For instance, you can’t write more than 250 DMs or 1,000 tweets in a day (including retweets), you can’t follow more than new 1,000 accounts in a day and so on.

Similar restrictions are in place for apps that connect to Twitter via APIs. For instance, Twitter clients can make a maximum of 350 API requests per hour and not more. 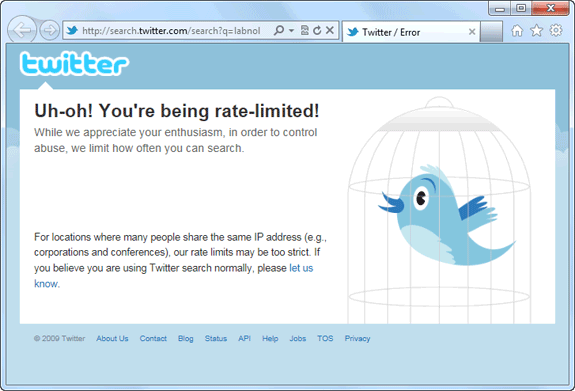 However, what I was not aware of was the fact that Twitter has a rate-limit for “human” users as well who access the Twitter web site through a normal web browser. What you see above is a screenshot of an unexpected error message I got while doing a routine search on Twitter.

The error basically says that if too may search requests originate from the same IP address, even through a web browser, Twitter will block the request.

It disappeared once I refreshed the page but there was this important bit in the message which most Twitter users aren’t aware of – “For locations where many people share the same IP address (e.g., corporations and conferences), our rate limits may be too strict.” My guess is that this restriction is only in place for anonymous users who are using Twitter search which logging in.