Wikipedia articles rank on the front page of Google for almost every known term be it American Idol, Blogs, iPod, SEO or Britney Spears.

No wonder, Wikipedia pages (that number more than 2 million) get huge organic traffic from Google and other search engines. But how do you find out the exact page views (or hits) that any Wikipedia entry receives per day ?

Using the raw server logs from Wikistats, Wikipedia administrator Henrik has created a tool at stats.grok.se that shows how many times any particular page has been viewed on Wikipedia. It’s something like Google Analytics for Wikipedia with public access. 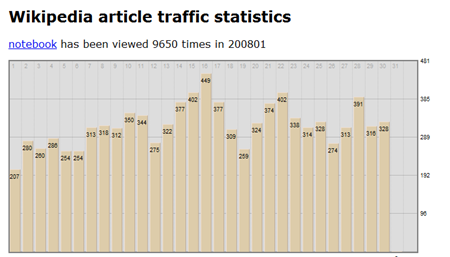 This could be a gold mine for content creators because traffic on individual Wikipedia articles is often directly proportional to the popularity of that term on the Internet. For instance, Notebook and Laptop are basically the same thing but more people prefer to use the term Laptop over Notebook.

And this is much better than Google Trends, BlogPulse or any other buzz tracking service because here you know the exact numbers, not relative data.