How Are People Twittering on Twitter ? Google Tells It All 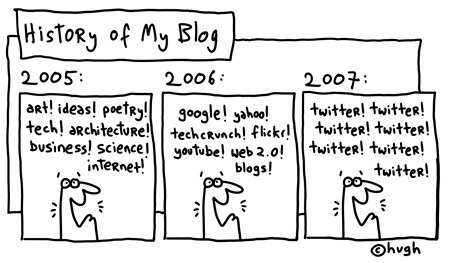 With so many different options in place, have you ever wondered what tools are really popular among the Twitter community ?  While there no official statistics available, the thousands of public Twitter profiles indexed by Google paint a fairly accurate picture.

Here are the results based on 105k Twitter profiles indexed by Google:

1. A very large majority (70k) of Twitter members change their status from the Twitter site itself. The next popular “official” method is IM followed by SMS which is at distant third. See graph.

3. It is quite surprising that Twitter Opera widget and OutTwit (Twitter add-in for Microsoft Outlook) have a fairly small user base. 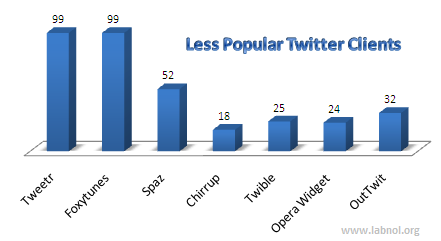 How we came up with these numbers ?

When you post on Twitter, your message (or tweet) contains the name of the tool you used to publish that update. For instance, if you update Twitter from the Netvibes widget, your message will read something like “about x hours ago from Netvibes”.

Since this information is also indexed by Google, you can easily guess the popularity levels of various Twitter software with a simple Google query:

There could be minor variations because not all Twitter profiles are public and lot of people may be using multiple way to update their Twitter status.