If you happen to click an RSS or Atom feed inside the latest version of Google Chrome, the browser won’t display the actual content of the XML file but will instead offer you to open the feed in either Google Reader or one of the Chrome apps.

XML Feeds are ‘greek’ to most users but for the rest of us, Chrome offers no built-in option to turn off this default behavior. Also, if you using an RSS feed reader that is not available as a Chrome app, like FeedDemon or Microsoft Outlook, there isn’t an easy way to set that external program as the default handler for RSS feeds in Chrome. 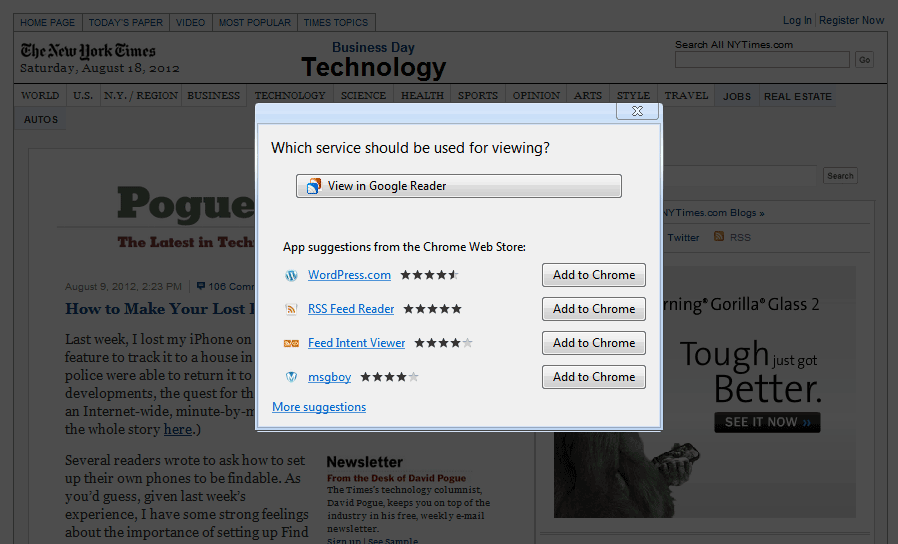 Some people aren’t very happy with this new “feature” of Google Chrome and the list includes Dave Winer, who is widely known as the “inventor” of RSS feeds.

How do you override the default behavior? Here are some options:

And if you would only like to view the source code of an XML file without an RSS reader, the easiest option is IE - it renders raw XML files as is but with syntax color and formatting.

Here’s a quick tip for bloggers who are syndicating their RSS feeds through Feedburner. Open your feed’s dashboard, then go to Optimize -> Browser Friendly and activate this service.  Your XML feed will now render as a standard HTML page in Chrome - see this RSS feed for an example.