If you ever come across a Twitter profile that you think is spam, you can either block the user from replying to your tweets or you can use the Report as Spam button and someone from Twitter’s safety team will possibly review that account.

When you report an account to Twitter, it won’t tell you a thing about the status of your request  but there’s a new tool called Later, Spam that keeps track of your spam reports and will let you know if a spammer’s account, that you reported, gets deactivated by Twitter. 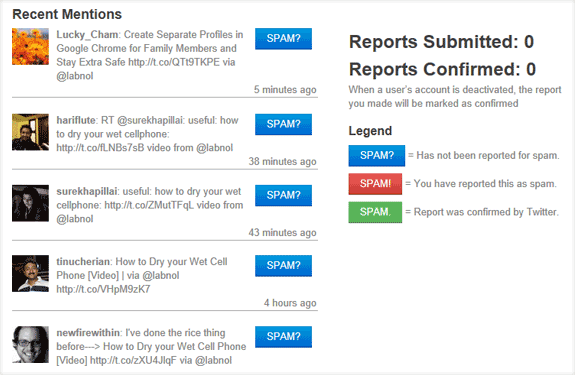 The only limitation – you need to report spam to Twitter through the Later Spam site itself and it will let you report profiles that have recently mentioned you in their tweets. You can’t report any random Twitter profile as spam through Later Spam.

A commenter on Boing Boing does however make an interesting point on why report spam profiles on Twitter may be a waste of time – “Spammers set up new accounts constantly, and Twitter doesn’t seem to have a strategy for dealing with the problem”