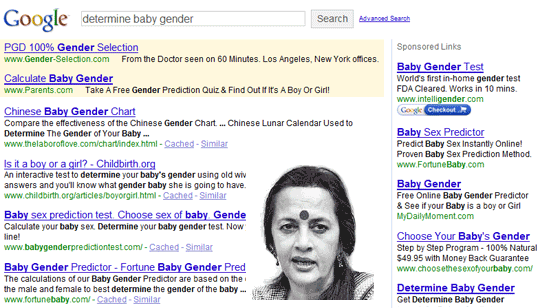 Indian politician Brinda Karat has demanded that the Google website be banned in India for showing ads of clinics that help parents determine the sex of their baby during the pregnancy stage. The law of the land says:

The Pre-natal Diagnostic Techniques Act prohibits determination and disclosure of the sex of foetus. It also prohibits any advertisements relating to pre-natal determination of sex and prescribes punishment for its contravention. The person who contravenes the provisions of this Act is punishable with imprisonment and fine.

Since this looks like a punishable offence, Brinda has made an additional demand - the chief of Google India website be “arrested and prosecuted immediately” for the violation.

Google on their part have denied posting such ads on their website - “In India, we do not allow ads for the promotion of prenatal gender determination or preconception sex selection.”

The interesting part is that Brinda’s claim isn’t entirely incorrect.

The moment I published this story, a Google AdSense Ad for “no-risk prenatal test” appeared in the sidebar of the blog as shown in the screenshot below. As I am seeing this page from India, Google algorithms should have ideally blocked that ad. 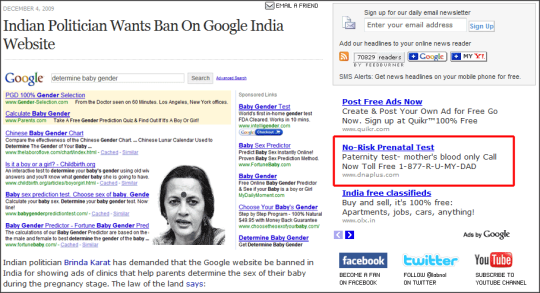 But yes, there were no ads for these topics on the main Google site.