Monitor Internet Censorship Around the World

While this Wikipedia article on Internet Censorship is a great resource to learn about the level of net filtering imposed in various countries of the world, it misses a few points like you won’t know about individual websites that may be blocked in a particular country.

For instance, Wikipedia will tell you that political sites are often restricted in China but what exactly are these sites and for how long have they been inaccessible? 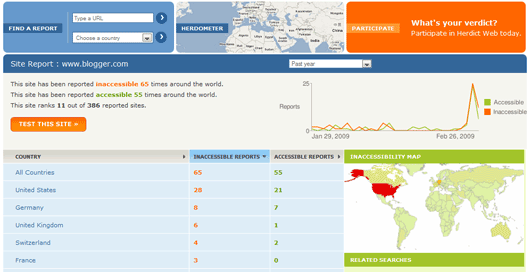 HerdictWeb (the verdict of the herd) is a new website from the Berkman Center for Internet & Society at Harvard University that applies the Digg style crowd-sourcing model to Internet Censorship to help you get a much clearer view of net filtering around the world in almost real time.

The site lets users flag web sites that may be inaccessible from their current location - the problem could be due to the local ISP or the web server may be down or the employer may be blocking the site or it could be censorship and the site may have been banned in the country. Now if enough people vote on the same site, you know that the problem is not just limited to yourself.

HerdictWeb also provides a map called Herd-o-meter that shows a list of sites as they get flagged by users from different part of the world.

There’s a country report that shows a list of sites that have been reported inaccessible in a particular country while the site report will show a list of countries / locations where that site may be unavailable.