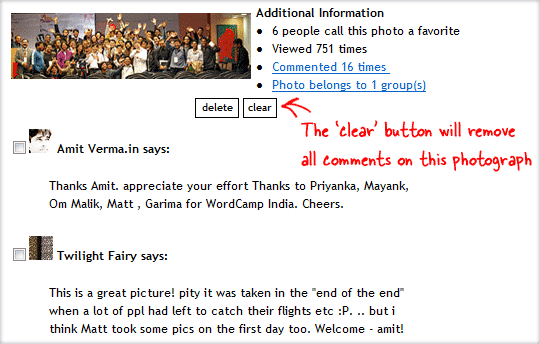 Unlike YouTube and Digg, Flickr has a very ‘civilized’ community and therefore there should be little reason for you to ever remove comments from your Flickr photos.

Flickr Cleaner scans your photostream and then display a list of photos that have comments. I am not sure how it sorts the pictures but looks like the ones with maximum comments are listed at the top. You can either delete selected comments from a photo or hit the “clear” button to remove every single comment from that photo.

Other than cleaning comments, you may also use the Flickr Cleaner service to manage photos that you have previously marked as favorites on Flickr. And not just photos, it works with your Flickr videos as well.