How to Identify the Language of any Text

If you ever come across words or sentences that are written in an “unknown” language, here are some tools that will help you quickly identify the name of that foreign language.

1. Google Language Detection - Paste a couple of words in the search box and the service will try detecting the language of the text using the Google Language API. The accuracy of the automatic language detection increases with the amount of text entered.

2. What Language is This - If Google is unable to determine the language of your text, try an alternate - What Language Is This. This is again a web-based tool for identifying the language of any text but unlike Google API, here the analyzing of text takes place in the web browser itself and no information is sent across the Internet.

What Language can recognize most languages (including Indic) but it can have trouble identifying characters of Japanese rÅmaji or Chinese pÄ«nyÄ«n. Hat tip Shankar.

3. Google Translate - If you need to determine the language of an entire web page or an online document, paste the URL of that page in the Google Translate box and choose “Detect Language” as the source language.

Google Translate supports a very limited number of language pairs but if you use translation with the “auto detect language” feature, it will at least let you determine the name of the source language. See screenshot:

Polyglot can recognize many more languages than Google API and also supports some rarely used languages such as Sanskrit. 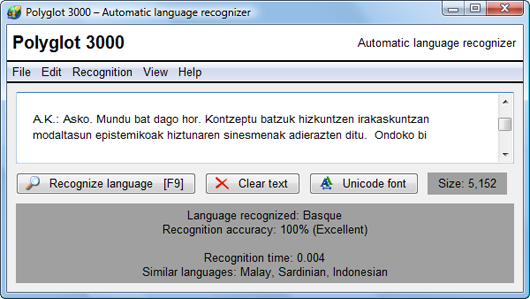 Related: How to Translate Outlook Emails (through Microsoft Translator)