Sitemap Reveals the Total Number of Google Plus Users

Facebook has ~850 million users, Twitter has 140 million active users while Google Plus, according to Larry Page, has around 90 million users worldwide.

I have some more usage data to share around Google Plus.

1. The Total Number of Google Plus Users

Larry’s note mentioned the number of Google+ users who have created their Google Profiles and engage with Google Plus or one of the other Google Products – like YouTube or Gmail or Google Docs – at least weekly.

The total number of Google Plus users, or people who have created their Google Profiles, is obviously much higher and it is quite easy to calculate that number. Here’s how.

Google maintains a sitemap file that contains a link to every Google Plus profile that is out there. Sitemaps are created to help search engines easily discover profile pages but the same file can also give us an idea of the total number of Google Plus accounts.

The sitemap was last updated on March 16th, 2012 so it does represent recent usage.

2. The Blank Google Plus Profiles

Then there are users who have created their Google Plus accounts but they probably never cared to fill even basic information in their profile pages. We can easily find these profiles using Google search itself.

When a Google Plus page doesn’t have any profile information, Google adds a little meta tag to that page that says – “John Q. Public has not filled out his profile yet.” This piece of data is enough to get a rough idea of the total number of the inactive Google Plus profiles.

Thus, according to Google search, there are ~25 million such profiles on Google Plus that lack even basic profile data. 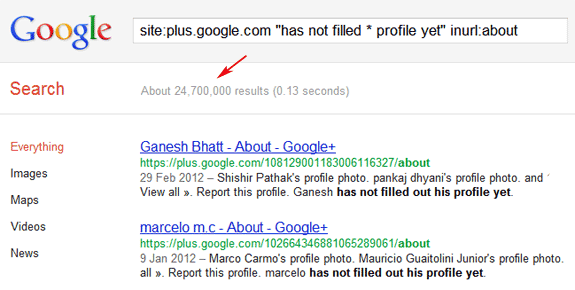