Better Inline Previews for your Gmail

Gmail offers inline previews for a couple of popular web services including YouTube, Flickr, Picasa and Yelp. What that means is if someone sends you a link to a YouTube video in an email, you can watch that video right inside your Gmail mailbox without clicking the link. You can similarly preview Flickr photo albums and Yelp ratings of places in the email itself.

Inline previews improve your Gmail experience but they aren’t enabled by default - you’ll have to turn them on manually from the Labs tab under Gmail -> Settings. 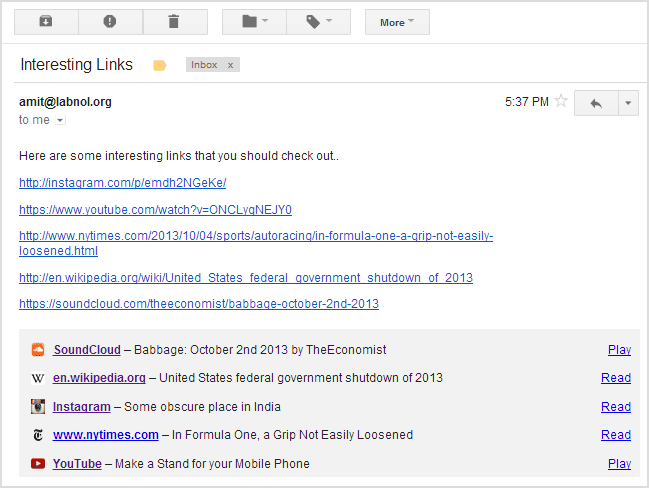 Gmail introduced inline previews in 2009 but they never expanded the scope beyond YouTube and Flickr. A new Chrome extension called Iframely builds upon on the concept of inline previews and add support for nearly every web service that’s out there including Facebook, SlideShare, Instagram, Vimeo, Imgur, Tumblr and Twitter.

With Iframely installed, you can not only preview almost any link that’s included in your email message but also read full web pages inside your mailbox. For instance, if a friend has sent you a link to a news story from the New York Times or the CNN website, you can read that full story inside Gmail without opening new tabs in the browser.

Iframely offers another useful feature for your outgoing message. While you are writing an email inside Gmail, just paste a link to any web image - like an Instagram photo - and Iframely will automatically insert the corresponding picture as an inline image to your email message. 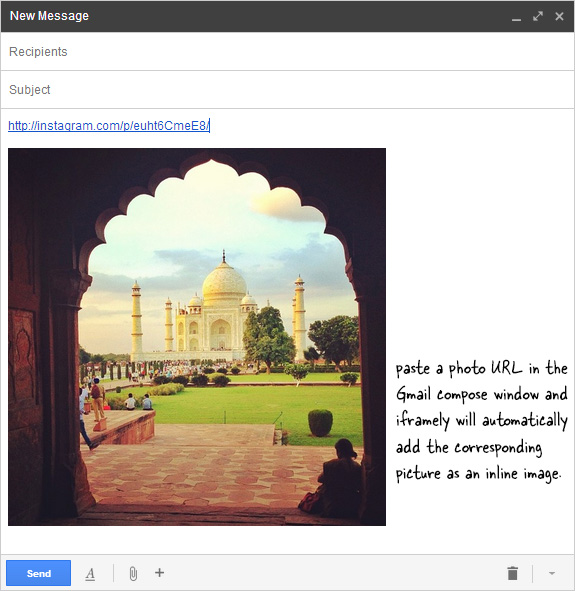 Chrome may sometimes display a mixed content warning since some of the embedded content could be served from non-https websites - you can click the shield in the address bar to remove the warning. [Instragram credit: Ashu Mittal]