How to Use Flickr as a Photo Backup Service

Flickr, the original photo sharing service, now offers 1 Terabyte of free storage space and that should be enough to store your half a million photos securely in the cloud. 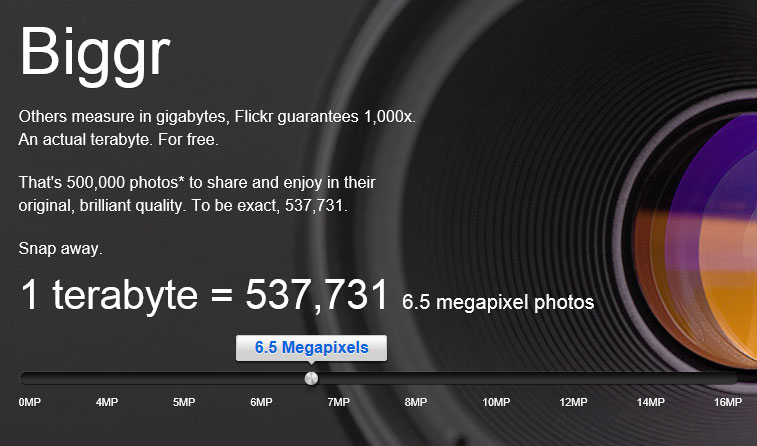 Contrast this to Dropbox which offers 2 GB of storage space or Google Drive where you get 5 GB for your files and photos. Flickr offers 200x more space with one minor restriction - the size of individual photos should be less than 200 MB. That shouldn’t be a concern unless you are a professional photographer dealing with pictures in the RAW format.

Armed with 1 TB of space, Flickr is now a good candidate to house your entire collection of digital photographs. You may set the default privacy of your online photo albums (Flickr calls them sets) as private and and search visibility as “hidden” and thus no one else will be able to search or view your pictures stored on to Flickr.

Flickr offers a browser-based uploader but it isn’t quite suitable for uploading hundreds and thousands of photos in a batch. There are however a couple of desktop software titles available that will make it relatively easy for you to transfer your picture collection from the computer to the Flickr cloud.

The official Flickr desktop uploader, available for Windows and Mac, was last updated in 2009 but it continues to work just fine under Windows 8 as well.

You can simply drag desktop folders on to the Flickr uploader and it will automatically extract all the image files from the folders and sub-folders. Also, you can go to Tools -> Preferences to change the default privacy before adding new photos to the upload queue. 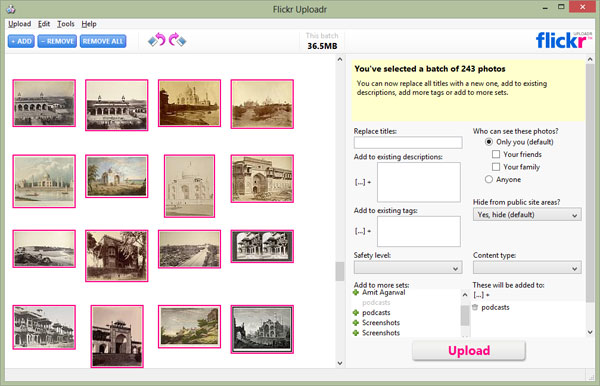 Flickr Schedulr is another good alternative to the official uploader as it offers nearly all the features but also lets you set a schedule for uploading pictures and videos to Flickr.

PhotoSync takes a Dropbox like approach for synchronizing pictures before the desktop and Flickr. It creates a special watch-folder on your hard disk and any files and folders that you add to this folder are automatically saved as “sets” on Flickr. It’s a two-way sync by default though you do have an option to prevent deletes on Flickr should you delete any pictures locally.

Finally, there’s FlickrSync for Windows that also offers automatic picture uploads but without requiring you to put pictures in one folder. Flickr Sync offers a tree-view of your hard disk (see screenshot), select one or more folders from the list and all the included photos will be sent to your Flickr. The sets will have the same name as your folders though you can override the default setting. 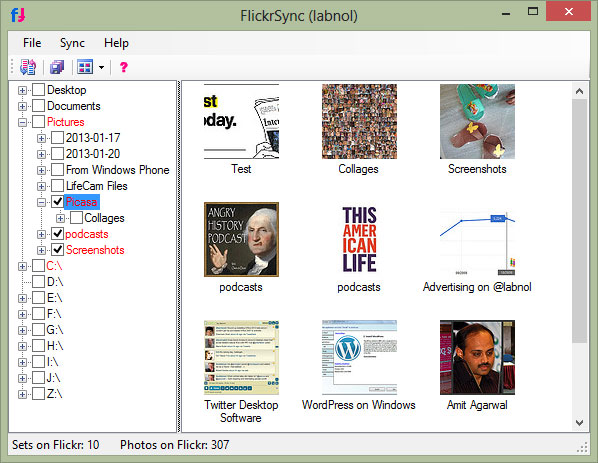 Synchronization is one-way so your locally-stored pictures are never deleted and Flickr just mirrors the contents of your local folders. You can also add network folders for synchronizing with Flickr. I’ll go with this one.