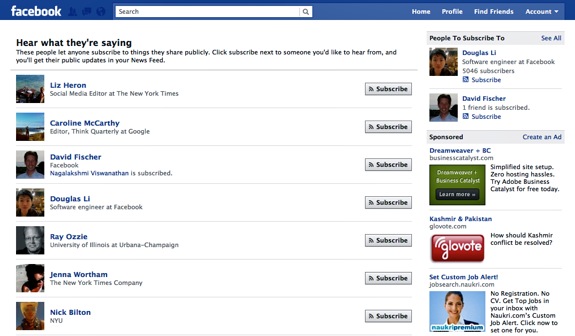 Today, Facebook has added a new feature where they recommend you other public Facebook profiles to subscribe to and these recommendations are probably based on your existing subscriptions. Twitter too has a similar recommendation engine which offers suggestions based on who you are currently following.

Twitter has a valid reason to worry here. They just touched 100 million users while Facebook has a 750+ million user base and people spend more time on Facebook than any other site on the web. Twitter only recently added support for multimedia while Facebook does a far better job at rendering shared content with rich snippets and inline previews.

I created my Twitter account some five years and it has taken me all this time to reach a few thousand followers. I enabled subscriptions for my Facebook profile a few days ago and the number of subscribers has already crossed the first thousand mark. That’s just because of the sheer reach of Facebook.