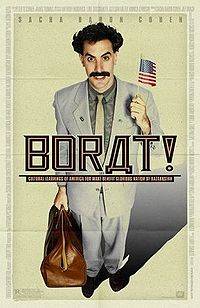 Pseudo Russian (or fake Cyrillic) typography is the use of Cyrillic letters to evoke the Russian feel while conveying the main message in English.

For example, in the 2006 film “Borat”, the title of the film on movie posters was written in faux Cyrillic characters as “BORÐ”T”.

If you like to convert your own English text into fake Russian, try the Fake Cyrillic Generator created by Jordon Kalilich.

This FÐ”ÐšÐ— CÐ£Ð¯ILLIC GÐ—Ð˜Ð—Ð¯Ð”TÐ¤Ð¯ will replace your Latin characters with Cyrillic characters such that they look similar.

For instance, the word “Labnol” in faux Cyrillic would look something like “LÐ”Ð¬Ð˜Ð¤L” - still recognizable but served with a ”Ð¯ussiaÐ¸ flavour.”