The Proper Way to Cite Tweets in your Paper

When Twitter launched in early 2006, it was meant to be place where people would share “what they were doing” in 140 characters or less.

That quickly changed and Twitter transformed into a communication channel where people would go to discover breaking news, companies would offer customer support or share product roadmaps, celebrities connected with fans and political activists living under oppressive regimes used Twitter to reach a global audience.

No wonder these tweets, though still limited to 140 characters, regularly inspire news stories in traditional media, researchers cite tweets in their academic papers and authors have written complete books using curated tweets – see Tweets from Tahrir and The World According to Twitter. 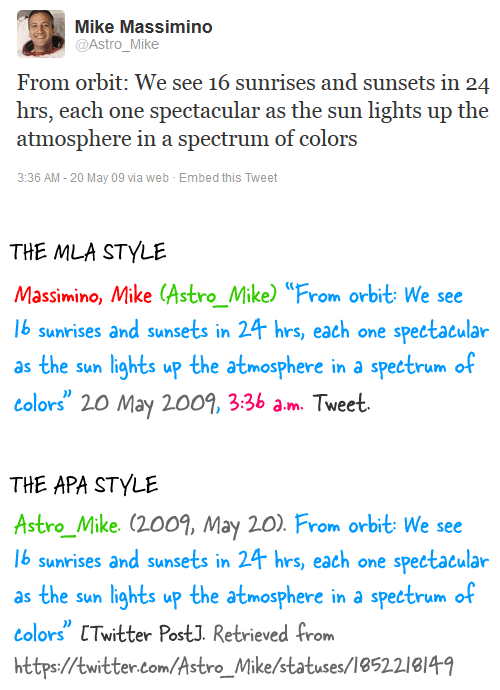 The education and research community follows a set of guidelines and formatting rules – like the MLA Style and the APA Style - to properly cite original sources in their writing and these style guides do offer guidance on citing tweets as well.

The APA Style recommends the following format (everything in CAPS should be replaced with corresponding values available in the original tweet):

There are a couple of important differences in the two formats.

The APA Style recommends including the Tweet URL (or permalink) and only the date (and not the time) of the tweet in the citation.

The MLA Style recommends adding the author’s real name in the citation as well as their Twitter handle. It also suggests including the date and time of the tweet in the citation and it should “reflect the reader’s time zone.” The idea is that using a consistent time-zone will help future researchers “to precisely compare the timing of tweets as long as the tweets are all read in a single time zone.”

I do however find it strange that the MLA style neither includes the Tweet URL nor the Tweet ID in the citation. Without this information, it will be difficult for researchers to fetch the original tweet from Twitter as search engines like Google aren’t very good at digging old tweets.