This interesting illustration suggests how long would a person have to work in order to earn enough to buy a Big Mac from a McDonald’s restaurant in his or her country using the local currency.

For people earning the average net wage, it would require about 10-20 minutes of work to buy a Big Mac in the US or UK but for someone working in Mexico or Jakarta, they will have to work for more than two hours in order to afford that big hamburger.

Working time need to buy a Big Mac (in minutes) 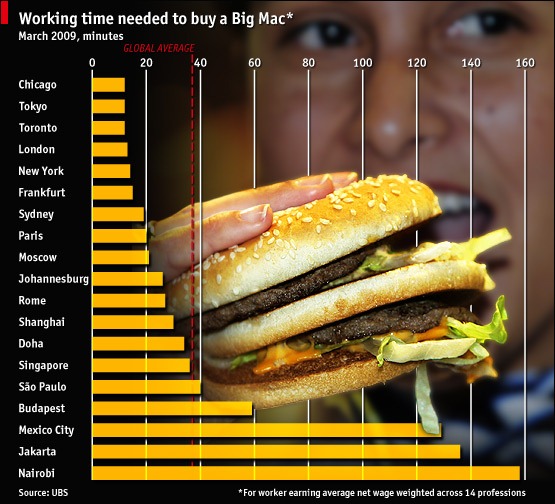 The Economist magazine publishes an annual index comparing the price of McDonald’s Big Mac is different countries. This informal index provides some insight into the currency exchange rates worldwide and also helps you compare the cost of living in different countries (the burger price is $2 in China but that same product costs about ~$6 in Switzerland).

Extending the Mac Index, UBS has recently published a report that shows how long would one have to work (on the average net wage) to earn enough for getting a Big Mac in his or her city.

The UBS study (PDF) also uses the globally available iPod Nano in their comparison of working hours. It says that average wage-earner in Zurich and New York can buy an 8GB iPod Nano after nine hours of work while workers in Mumbai need to work roughly for a month to purchase the iPod Nano.