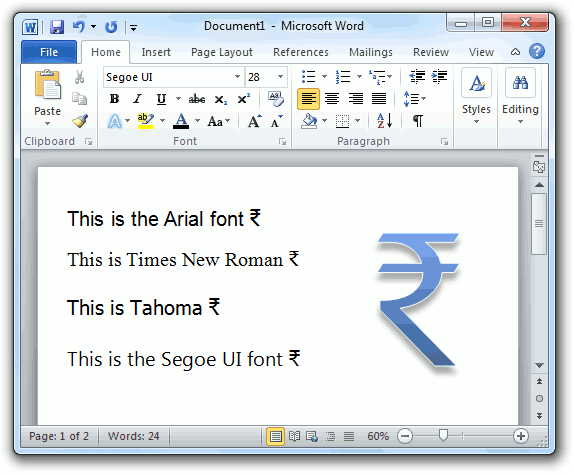 The India Rupee symbol is now part of the official Unicode standard but for you to type that new currency sign into your favorite word processor or spreadsheet using a regular keyboard, your existing fonts must be updated to the new standard as well.

There are some font families – like DejaVu fonts - that have been updated to the new Unicode standard and thus include support for the new currency symbol but the problem is that these fonts have limited adoption.

Well the good news is that Microsoft has recently updated all the common fonts the ship with Windows to include support for the new Indian Rupee symbol. That means you can open a document inside Microsoft Word (or notepad), select a popular font family like Arial or Times New Roman, and type the Rupee sign directly.

To get started, you first need to update your existing Windows fonts by installing the kb2496898 hotfix available for both Windows Vista and Windows 7. Once installed, this will update the Arial.ttf, Times.ttf, Tahoma.ttf and some of the other font files on your computer with the latest version.

How to Type the Indian Rupee Symbol using Arial

Launch Microsoft Word, change the document font to Arial or Tahoma, and type 20B9 followed by Alt-x. If the 20b9 string is converted into a Rupee symbol, as in the screenshot above, the update has been successfully applied.

Here’s a screeencast that explains how you may add the Rupee symbol to your documents.

The Microsoft fonts update is available as a free download to anyone who is running a genuine copy of Windows 7 or Vista. However, if you add the Rupee symbol to your document and share it with another colleague who doesn’t have the latest Windows fonts, they are likely to see some junk characters in place of the Rupee sign.

A simple solution to this problem is that you create a PDF file of your Word document with font embedding enabled and that should preserve the character even if the font is missing - see sample PDF. The Rupee symbol will be visible in the PDF even if you don’t have the latest Arial font on your Windows machine.

Update: Microsoft has provided the updated fonts for Windows 7 and Vista only but as a commenter points, he copied the ttf files to his Windows XP computer and they worked. There’s no official confirmation if the fonts are compatible with XP or not. [via].