Marketing to the Diverse Indian Consumer

India is a land of a billion people, speaking 151 languages. It offers employment opportunities ranging from doctors, IT professionals, businessmen, snake charmers, yogis, farmers to bonded laborers. With a per capita income of $950 per year, among world’s fastest growing economies; the country that has every major auto giant pitching their tents; still has over 70% of its people earning less than a dollar a day.

The one word that summarizes Indian consumer is “Diversity” with D capital of languages, climate, color, religion, caste and economic class. It offers a perfect googly for a conventional marketer.

One approach though, adopted by some of the leading FMCG majors, manages to cut across the clutter. It is to divide the Indian Consumer into three broad stereotypes based on a) their size of wallet, occupation and education and b) the sort of town/village or city they live in. 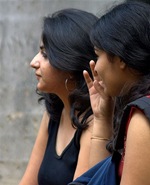 Consumers living in top 30 cities of the country; with household income exceeding Rs. 35000 per month ($ 700). Post graduates or professional graduates; businessmen, self employed (CAs, doctors, architects etc.), executives; owning major white goods like refrigerator, washing machines, TV and a Car. They are at par with the developed world’s consumers in terms of tastes, preferences and propensity to spend.

Consumers living in Indian towns having a population of 20,000 and above; with a household income between Rs. 15000 and Rs. 35000 per month ($200 to 600); graduates; white/blue collared workers; small businessmen, traders, self employed. They would own any two of the three surrogate white goods – refrigerator, washing machine and TV.

They would offer a uniform answer to the three basic marketing questions above. They are typically very focused on their child’s education.

They would be poor but with an employment, have aspirations and hope for their children having a better life.