Organised Retail and Mall Mania - not a rosy picture ahead 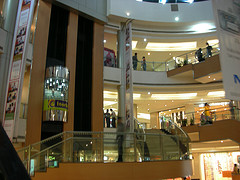 For those of us who think that Indian organised retail trade is on a dream run, here is an eye-opener. The recently merged leading real-estate consultant Jones Lang LaSalle Meghraj has published a report mentioning that India’s retail trade industry would witness an imminent shakeout.

The organised retail in India is expanding like never before owing to strong economy, favourable demographics, rising income, changing lifestyles and consumer aspirations of an ever-burgeoning middle class.

The report mentions that 90% of Indian malls are well below international standards due to factors like faulty planning, bad location and property woes. It forecast that some malls might be taken by equity funding agencies or used for altogether different purpose.

The survey has also identified 50 Indian cities which are the potential beneficiary of the organised retail boom. These have been divided into five categories: 1.  Maturing – Delhi, NCR, Mumbai belong in this and these markets are seeing saturation. However large one-stop malls having retail, entertainment, food and hospitality would have demand, along with hypermarkets, and malls having high-end, luxury brands. 2.  Transitional – These include cities like Bangalore, Kolkata, Hyderabad, Pune, Chennai and Ahmedabad. By 2008, they would account for one-third of total market due to their large corporate sectors, high level of economic activity, above-average income, and large middle-class. 3.  High-Growth – These are the ‘next’ retail destinations of Chandigarh, Jaipur, Ludhiana, Lucknow, Kochi, Surat and Vadodara. 4.  Emerging – They include cities which are tourist oriented, and have setup infrastructure for IT companies like Nagpur, Indore, Nasik, Bhubaneshwar, Vizag, Coimbatore, Mangalore, Mysore, Thiruvananthapuram, Amritsar, Agra and Goa. 5.  Nascent – These offer the first-mover advantage as the income levels and corporate activities are limited. The cities are Patna, Bhopal, Meerut, Asansol, Varanasi, Kolhapur and Sonepat.

The top 15 cities in the list will contribute more than 80 per cent of the total national retail business by 2008.

Judging from the report ‘India 50’, it can be safely assumed that the shakeout would result in a scenario where small and medium players would exist while only big players with professional expertise and financial muscle would see the light of the day.