The Branding of 'Ghajini'

Apart from the ongoing success of Ghajini, the movie has been able to create much hype in the corporate world through its well tuned and finely coordinated marketing campaign pre and post movie release.

Ghajini has been marketed as ‘India’s first event film’, one that has the potential to become a successful business venture rather than just the box office success of the movie. 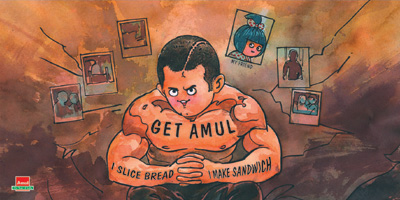 It all started with the buzz created around Aamir Khan’s haircut. The haircut attracted 18 hours of television coverage, translating into publicity worth Rs 129.6 lakh. Further TV news channels showed 31 hours of coverage translating into   Rs. 423 lakh worth of publicity.

Ghajini was released on 1,400 screens in India and 300 theatres outside India, inorder to have maximum revenue in initial weeks of curiosity.

The multichannel revenue includes Indian theatre and satellite rights to Studio 18 for Rs.60crore. Music and home video rights were given to T-Series for Rs.8.5 crore and overseas distribution rights to Big Pictures for Rs.10 crore.

In branding, tieups were done with Van Heusen, Big Cinemas, Tata Sky, Tata Indicom, UTV and Samung mobiles, who together have spent Rs.14 crore in promoting the movie.

Incidentally Aamir Khan is the brand ambassador of Tata Sky and Samsung Mobile, while Tata Sky aired making of Ghajini, Samsung Mobile went for a repositioning and launched special Ghajini edition L700 and M200 models which had preloaded Ghajini ringtones, pictures and songs.

Big Cinemas promoted the movie by getting its 105 members of staff sporting Aamir’s hairstyle, life size models and tattoo stickers for distribution.

Many Ghajini games have been developed to take advantage of film’s craze. FX Labs has developed a 3-D PC console game, while UTV owned Indiagames has developed five mobile based games.

On the internet too there are sites catering to Ghajini phenomenon which includes wallofsuspects.com,   a treasure hunt site findghajini.com and official site rememberghajini.com

Soon, the official merchandise of the film will also be launched in stores. Apart from the above brands, there were references to several advertisements and brands like Hamam soap, during the movie to give a sense of brand recall.