Google Street View is in India - Would you Opt-Out? 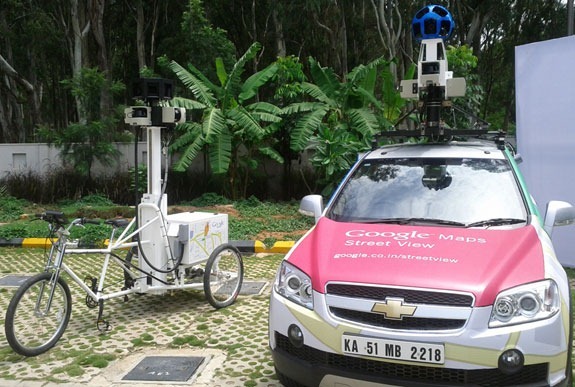 Chevrolet SUVs with mounted 360 ° cameras, like the one pictured above, would soon be scouring the streets of Bangalore, Mumbai and New Delhi capturing photographs for Google’s Street View project.

Today, anyone can get an aerial view of your home on Google Maps and Google Earth but once the new street view imagery goes live, maybe after few months, people will be able to explore your location as if they are just walking outside the front of your home.

There’s no denying that Google Street View is brilliant (see this visual gallery of some well-known places that have been mapped so far) but the bigger question is - are you comfortable with Google taking pictures of your home and putting them on the Internet for public access?

I put the same question to some of my “offline” friends here and most replied in the negative. They were fine with Google putting their business locations on Street View but didn’t feel very safe posting pictures of their residences on the Internet.

The concerns centered around privacy and security but aren’t my friends over-reacting?

Few years ago, I was invited to Google’s Gurgaon office for some publisher related event but had lot of trouble locating the office. Why? There were no sign boards anywhere, Gurgaon had at least two different buildings with the same name (DLF City) and the security guards outside these buildings had little clue about which offices were housed inside.

Later, a Google employee told me that none of their offices in India have sign-boards for ‘safety’ reasons. In 2006, Shiv Sena workers targeted Google’s office in Mumbai because of certain ‘hate’ communities that existed on Orkut. Everyone knows that Orkut is operated by Google and thus the workers targeted the Mumbai office. That incident probably prompted Google to remove the sign-boards.

Isn’t it ironic that a “search” company doesn’t want outsiders to “see” their physical location. Maybe I cited an extreme case but there’s no denying that the scene is a bit different in India.

What do you think? Google will obviously make it easy for you to wipe off your home pictures from Street View, if you wish so, but would you be opting-out?

Also, here’s a news video from CNN IBN that discusses the launch of Street View cars in India:

And the next video was probably shot outside Google’s office celebrating the rollout of first Street View cars in Bangalore: