How to Capture Screenshots of your Blackberry Screen

I recommended some commercial screen capture utilities in my previous guide for BlackBerry but you can safely ignore that advice as here are alternate solutions that aren’t just free, some of them will even help you grab images of your BlackBerry screen without having to connect the phone to the computer.

Get the free Java Loader Commander utility from BBforums (mirror) and unzip the file to some folder on your hard drive. Now connect the BlackBerry device to your computer via the USB cable and navigate to the screen that you want to save as an image.

Open the command prompt and switch to the folder that contains the extracted files. Type JL_Cmder.cmd and press enter. Just follow the simple wizard to save screenshots of your BlackBerry screen. 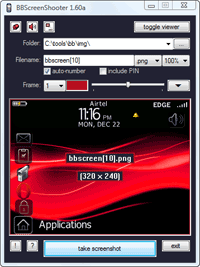 The official RIM command line utility discussed above can be a bit intimidating for non-techies so here’s a standard GUI based application for capturing screenshots of BlackBerry.

The utility is called BBScreenshooter and it lets you take captures in multiple image formats from your Windows desktop. You can even preview screenshots before shooting.

To use BB Screeenshoter, first download the JavaLoader tool and unzip it to a folder. Then download the BBscreenshoter.exe file in the same folder and run. Specify the location of Java Loader utility and the application is now ready to take pictures of your BlackBerry screen.

The downside with either of the above solutions is that they both are desktop based so you first need to connect the BlackBerry phone to the computer before taking screen captures.

Now in situations where you want to grab the BlackBerry screen while you’re miles away from the computer, CaptureIt will come very handy. Open m.thetechmogul.com in your BlackBerry browser and install the CaptureIt application (mirror).

This will add a “Capture It” option to your BlackBerry menu - you can select that option, wait until the vibration is over and an image of your current BlackBerry screen will get saved either in the external memory card or to the device memory.

Alternatively, you can go to Home - Options - Screen Keyboard and assign a convenience key to the Capture It application. Then you’ll be able to capture screenshots with a simple click without having to use the menu option.